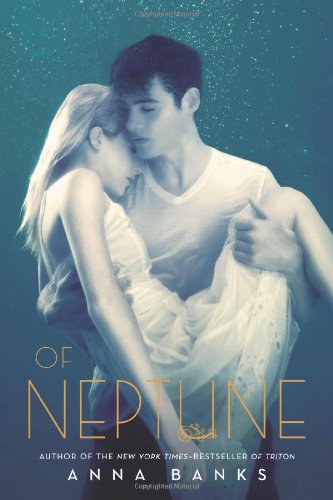 Emma, who is half human and half Syrena, and her Syrena love Galen, need time together. Alone. Away from the kingdoms of Poseidon and Triton. Emma’s grandfather, the Poseidon king, suggests the two visit a small town called Neptune.
Neptune is home to both Syrena and Half Breeds alike. But Emma and Galen didn’t sign up to be peacemakers between the ocean and land-dwelling, freshwater Syrena. They didn’t bargain for meeting a charming Half Breed named Reed, who can barely disguise his feelings for Emma. And they especially didn’t expect to find themselves in the middle of a power struggle that threatens not only their love, but their ocean kingdoms.
In this stunning conclusion to her bestselling Syrena Legacy, Anna Banks thrills fans with more action and romance than ever.

KEEP READING FOR MORE INFO ABOUT THE BOOK
AND TO READ TRISH’S REVIEW!

It all comes together in this one. I was surprised about who ended up being behind everything, and that there were two bad guys for two different plot lines. One was hinted at pretty early in the series, but not specifically, the other only popped up in this book, but explained a few things.

I enjoyed the surprise setting of this installment as well as the narrator’s performance, nailing those accents.

Didn’t quite buy the triangle, but thought it was handled ok.

Overall liked the story. I’d recommend the series to folks who love mythology inspired YA stories and those who like tales about merfolk.

The review copy of this audio book was borrowed by the reviewer from a local library.

Anna Banks is a young adult author whose primary goal is to entertain smart, funny gals like herself. You can expect her works to be centered around a love story, freckled with humor, and seasoned with sarcasm.

Anna grew up in a small town called Niceville (yes, really) in the Florida Panhandle. She now lives with her husband and daughter close to her hometown. The youngest of seven children, she was spoiled beyond comprehension growing up. Before she started writing, Anna worked as a banker and a waitress. She loves old movies, fried chicken, and Simon Cowell, but loathes exercise, licorice, and haters.

REVIEW by Trish: Legacy by Ellery A. Kane (@ElleryKane)

REVIEW by Beth: Last Call for the Living by Peter Farris – Released May 22nd (@pjfarris , @bunnybetha)